Correct thread depth. Save time calibrating your pipe threading dies before you thread the pipe.

Now you are ready to thread a piece of pipe and you will get the correct thread depth for approximately three turns on the fitting every time.

The Thread Wright Saves You Money

Any company that threads pipe can increase their bottom line by using the “Thread Wright”. For instance, we had an owner of a small fabrication shop track how much time his employee’s spent calibrating dies. He estimated that he spent approximately $4500 per year per man calibrating dies. That works out to be $2.16 per hour spent on just calibrating dies, based on a 40 hour week. Suppose that employee makes $15.00 per hour, then that would mean that he spends 8.64 minutes of every hour adjusting dies. Now reduce that time to one minute using the “Thread Wright”, which would be $.25 per hour or $520.00 per year. By using this simple tool this fabrication shop could save almost $4000 per year, per man. Not to mention the added 7.64 minutes per hour or 264 hours per year of productivity.

There is also the added benefit of the consistency of the thread depth which will reduce the chance of leaks in the field. A fire sprinkler contractor estimated that a leak on a job after they have left costs a minimum of $500.00 in time and lost productivity, and that doesn’t include any equipment such as lifts needed to reach the leak or damage to finished surfaces.

Another time saving quality of using the “Thread Wright” is that a new employee will be productive threading pipe quicker than he would had he learned the old trial and error way of setting the thread depth.

The “Thread Wright” is a must have tool for any company that threads pipe. It will save money and time and increase the quality and consistency of the thread depth. 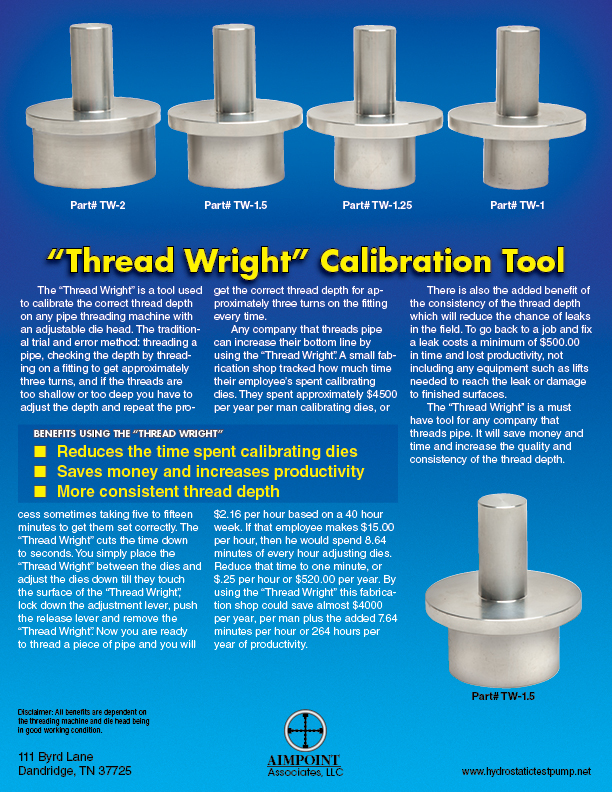